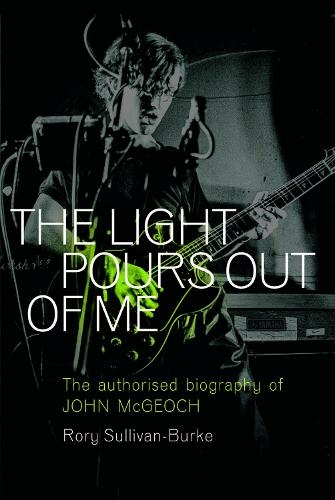 In this highly entertaining and in-depth biography, author Rory Sullivan-Burke tells a fascinating story that is truly contemporary and speaks powerfully of the enormous impact John McGeoch’s playing has had on music since then. He developed a style unrelated to traditional blues-based rock guitar à la Eric Clapton, rejecting extensive soloing in favor of exploring textures and effects.

The final years of the ’70s hosted an extraordinary period in music making, when the initial punk energy either dissolved into a formula or diversified into new forms. The term “post punk” hardly did justice to the variety of ideas and characters that made up the scene. I was one of many whose attention was caught by the soaring guitar lines of the magazine’s stunning debut single, “Shot By Both Sides.” This was our first encounter with John McGeoch’s exceptional playing and arranging skills.

It’s even more impressive as it’s the author’s first book with an intriguing backstory. Rory Sullivan-Burke is a community and care worker and has been diagnosed with Asperger’s Syndrome. Magazines were his favorite group. Surprised that there was no detailed account of the group’s history, he decided to write it himself. After securing the publisher’s support, he began research – only to collide with the first effects of lockdown two years ago. Not to be deterred, he refused to give up and conducted most of the interviews informing the book by telephone. It’s really the variety and depth of the interviews that make this book special. I was surprised to find that they were based on phone conversations, since they read like real face-to-face conversations between people who knew each other well – like Johnny Marr’s many insights, or the statement that this was true for her entire Ice Maiden audience persona, Siouxsie Sioux was a constant source of support and encouragement.

Arguably the most impressive feature of the book is the involvement and collaboration with McGeoch’s family, particularly his daughter Emily. This really puts the narrative somewhere else than most music books and takes us further than the familiar studio, album, tour, repeat narratives – instead, we get a real sense of how he was off the music scene and how important family life was for him. He was a complex character, a highly intelligent man who probably could have been a great artistic success as a painter even if he had never picked up a guitar. His friends describe him as a strong character with a great sense of humor, genuine loyalty to his buddies, a weakness for alcohol and also a great cook. His career followed a restless pattern of joining groups, making great music, but then becoming restless, often due to problems with lead singers.

In Magazine, he grew increasingly frustrated with Howard Devoto’s ambivalence about being drawn into the pop star game, first at the singer’s half-hearted and unapproachable performance when Magazine got the then-Holy Grail of a Top of the Pops slot. Except, as the author points out, this was probably the only time a record actually charted after being on the show. When the singer announced that he would not be doing interviews to promote a new album, McGeoch felt it was too much. There were also the usual disagreements over composing credits and royalties, and a feeling that the keyboards were becoming too dominant in the magazine sound. A rather casual encounter led to his collaboration with the Blitz Club crew, who ended up recording as Visage, resulting in a surprise megahit with Fade To Gray and a corresponding boost to John’s finances, giving him a buffer and measure of freedom should at his next ventures.

The next step to Siouxsie & the Banshees seemed like a logical step, but it turned out to be a minefield of complex relationships. Still, he was involved with a string of classic albums – Kaleidoscope, Juju and A Kiss in the Dreamhouse – that propelled them from their raspy punk origins to Dreamhouse’s artsy psychedelia albums, along with an impressive string of Top 20 singles . However alternative the group hoped to be, they were still subjected to the relentless grind of endless touring, leading to his penchant for a drink or two turning into something more serious, along with heavier drug use (mainly Coke, it sounds) . .

The next phase, The Armory Show, featuring former Skids frontman and polymath Richard Jobson, was supposed to be a sort of post-punk Blind Faith/supergroup featuring McGeoch, former Magazine drummer John Doyle, and another ex-Skid (and close friend) Russell Webb. I’ll revisit their lonely album after reading more about it here, but to me it embodied all the worst aspects of 80’s overproduction, with the guitar barely audible behind walls of keyboards, synths and pumped-up drums, crowned by Jobson’s stentor below. Also, the group was plagued by my management problems – musicians in Europe, managers in the US, but no record deal there. Two strong characters like Jobson & McGeoch would probably never be a long-term match – but there is an intriguing subplot (typical of the book) in which McGeoch takes on Jobson’s wayward younger brother Michael as a sort of protégé and guitar technician. Michael Jobson’s comments are among the most insightful when it comes to understanding a complex character like McGeoch.

Again, joining PIL seems like a natural next step for him. Fellow guitarists Keith Levene & Lu Edmonds are effusive in their praise, but the ‘elephant in the room’ was, of course, John Lydon. By then, McGeoch had driven around the block a few times for hits, money, and musical knowledge, so he wasn’t inclined to faintheartedly bow to Lydon as supremo. In fact, Lydon is pretty much the only person who doesn’t come out of the book well – he didn’t want to be involved or contribute at all, but maybe not that surprising when you read of his casual reaction to McGeoch’s death. Once again, life with PIL was complicated by management – McGeoch felt that Lydon’s US executives were more interested in getting him into television or films than developing PIL musically. All of this culminated in Lydon signing a solo deal in the US without consulting the others, effectively ending the group and unsurprisingly viewed by McGeoch as a serious betrayal. There was also the infamous incident in Madrid where he was badly injured after being hit in the face by a bottle thrown from the crowd, after which playing live was always an ordeal.

The closing stages of his life and career form a poignant coda to the story. By the time he left PIL, the music fashion had changed drastically. In the early ’90s, dance and trance dominated the charts, with hip hop becoming more powerful each year and guitar becoming a chart rarity. In the past, John had always managed to get by between the groups with session work, but now he was no longer in demand. At the same time, he was fed up with the drudgery of street life, also knowing that this was the source of his alcohol addiction (as it had been up until then). He retrained as a nurse and nursing assistant and devoted himself to the upbringing of his family with love and generosity, and was also revered by his elderly patients. Daughter Emily and ex-wife Denise’s contributions are truly moving. I would single out the late Nicky Tesco’s comments as particularly perceptive on John’s later years. Unfortunately, rural retirement and a reduction in alcohol consumption came too late, and he died in his sleep of an epileptic seizure in 2004.

This is truly an amazingly detailed book. There’s so much more I could say to do it justice, whether it’s a snippet like Tom Verlaine, who is one of John’s main influences, or the sheer breadth of the interviewees – I haven’t had a chance, Peter Hook, John Frusciante Not to mention Billy Idol, Johnny Greenwood, all of whom have plenty to offer. In addition, there is a refreshing directness in the writing style, at times a kind of naivety that distinguishes it from the archaic know-it-all tone of many music books. There are also many photos, mostly provided by the family and not previously shown, along with artwork by John McGeoch’s lifelong friend, Malcolm Garrett.

I’ll admit when I first started reading the family-recommended book I worried that it might be a bit of a fan job, but Rory Sullivan-Burke makes a compelling argument for John’s massive influence in rock music since the late ’70s. Rather than airbrushing his counterpart’s flaws, he displays the essential generosity of John’s creativity, his playing always at the service of the song and the group, far removed from the guitar hero cliches he despised.

You can find the book in all good bookshops – Omnibus here: